A downloadable game for Windows

Become the boss or play the hero in this 4 player asymmetrical fighting game!

This game was commissioned for PlayNYC 2021 through the Graffiti Games program.

Take on the demon in the castle, or eliminate the heroes that dare to disturb you. The choice is yours!

This game requires all players to use XBOX controllers

In the character select screen, once everyone is ready, the Boss must press Select to start the fight.

There is an HP gauge indicating the health of the player, as well as an MP gauge under that.

Each attack the swordsman inflicts upon the boss increases a secondary [BREAK] gauge. While the boss is charging an attack, they will take higher [BREAK] when attacked. Once the [BREAK] gauge is full, the boss will be stunned and have to mash out of their condition. While stunned, the boss will take 2x the damage from the Wizard, so collaboration is key!

The Wizard is the ranged glass cannon. As the DPS of the group, the Wizard is able to deal high amounts of damage in a relatively short time. The Wizard is able to use their special attacks in order to deal a lot more damage more efficiently. When the [BREAK] gauge is full, ensure you have enough MP to burst through your attacks, as you do 2x damage while the boss is stunned!

The Cleric is the healer of the heroes. They are able to stun, deal damage, and place potions on the field of battle for other heroes to use. The cleric is also able to use a regeneration spell that helps the party for a limited amount of time, however it takes a combo to use as well as a lot of MP. Manage your MP carefully on the field, and you will make it out alive! X X X Y Y

As the malevolent Revenant, these intruders must be dealt with. Each move you do requires a task on your end in order to complete your attack. Wave Attack is your most basic move, mash (A) to extend your body and extending it over your opponents. It is one of the fastest attacks in your arsenal, and requires no recovery. This attack later becomes Flamepunch once your health reaches less than 50% remaining. Flame Pillars is how you deal with the pesky Wizard at the end of the stage. Mash (B) until you are ready, then raise your pillars with (A) Longpunch is how you deal real damage to your foes. Mash (X) to wind up this attack, and mash (B) to recover Spikes is how you deal with the Swordsman, as you extend your body into the air by mashing (Y), you come crashing down with a well timed attack. The better timed attack, the higher the damage and knockback. There is a Light, Medium and Heavy version, and you will need to recover by mashing (B). While preparing your attacks, you will not drain [BREAK], and you will take more [BREAK] damage than usual. If your [BREAK] gauge does fill up, you will be stunned. In order to get out of stunned, mash  all face buttons to get out of stun. Once the [BREAK] gauge reaches zero, you will automatically preform a Flamepunch, no matter the current status of your health. 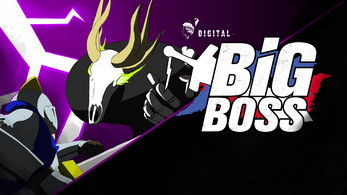 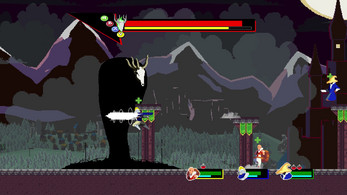 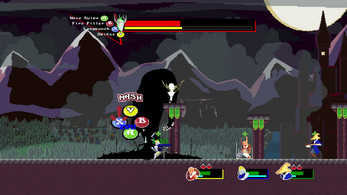 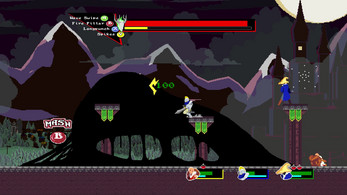